Information about the 2022 edition will be available soon

See you next year!

The 2021 edition of the Spa Summer Classic is over. We look forward to seeing you next year! Don't hesitate to follow us on Instagram and Facebook so you don't miss any news

The Spa Summer Classic is a race weekend for classic car drivers from the 1960s to the 2000s. This thirteenth edition will focus on welcoming the teams, drivers and mechanics, to offer them a festive and warm weekend with all the safety and professionalism that such a meeting requires.

The grids will include old Touring and Grand Touring cars from the 60's, 70's and 80's as well as a category of Youngtimers, up to the early 2000's. The meeting will also host Single Seaters - Formula cars from the 60's and 70's and a Formula 3 race.

Each series will participate in the races in compliance with the safety standards in force, decreed by the competent authorities, and under the authority of the Royal Autombile Club of Belgium, both in terms of technical and sporting safety.

An endurance race of 3 hours will be organized with refuelling at the pumps of the circuit.

The weekend will have a European flavour, as German, Dutch, French... crews are expected, that is to say nearly 90% of the field. It is a race weekend only, without any additional activity.

Let's talk every day with the real historic car in

Let's have a look at what happened yesterday durin

Let's talk every day with the real historic car in

This message is only visible to admins.
Problem displaying Facebook posts. Backup cache in use.
Click to show error
Error: Error validating access token: The session has been invalidated because the user changed their password or Facebook has changed the session for security reasons. Type: OAuthException

Thanks Newsclassicracing for the coverage! 👊About👉 www.newsclassicracing.com/Spa-3-Hours-la-victoire-pour-Van A look back at Christophe Van Riet Gipimotor and Frederic Bouvy's (Shelby Cobra) victory at the #Spa3Hours 🇧🇪👏 #spasummerclassic 2021 ... See MoreSee Less
View on Facebook
- Share

Let's take a look at what happened this weekend on the "Circuit of Spa-Francorchamps" ☀️🌴 ... See MoreSee Less
View on Facebook
- Share

Let's talk every day with the real historic car enthusiasts who make the charm of the Spa Summer Classic 🤩During the weekend we met Beat Gubler 🇨🇭 who tells us about his love for American Muscle Cars, especially his 1970 Dodge Challenger and its 9.4l big block V8 🚙 ... See MoreSee Less
View on Facebook
- Share

Let's talk every day with the real historic car enthusiasts who make the charm of the Spa Summer Classic 🤩During the weekend we meet Charlotte Engell 🇩🇰 who tells us about her beautiful Ford Escort MK1 TwinCam 🏎️ ... See MoreSee Less
View on Facebook
- Share

Map of the paddocks 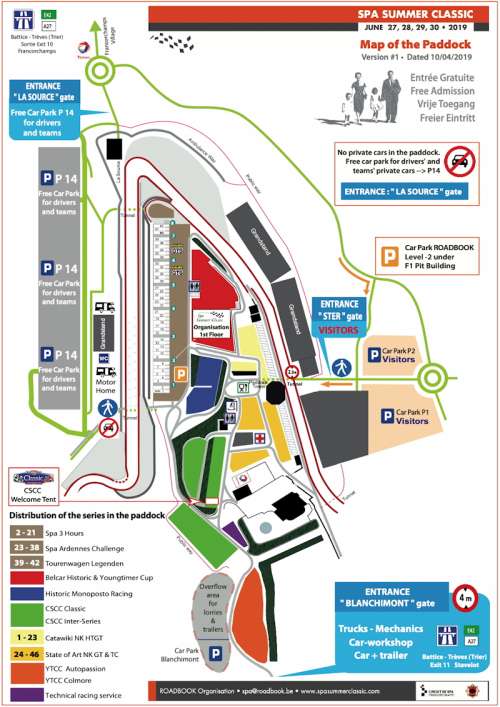